Black gram, locally known as Urad dal, is the major food crop of smallholder farmers of Sagar district. The crop is cultivated mainly for meeting the consumption needs and thus constitutes the mainstay of household food security. This year, smallholder farmers of Shahgarh block of Sagar district designed and implemented an improved black gram cultivation system that can resist the attack of the dreaded Yellow Mosaic Virus (YMV). Broadcasting of treated seeds on a trial plot

YMV is a highly contagious disease spread by white fly – a vector aphid. Farmers can easily recognize YMV attack at its early stage itself since the leaves of affected plants turn into pale yellow before dying out. Since the affected plants become yellow, farmers call YMV attack as ‘Peeliya’ which translates into jaundice in Hindi. Farmers have traditionally been helpless in warding off YMV which is considered as the nemesis of black gram cultivation. The helplessness of farmers in protecting their black gram crop from YMV is very pronounced. Whenever a farmer detects YMV attack on even one plant, the entire standing crop is chopped down and fed to the cattle! Black gram, botanically known as Vigna mungo, has been in cultivation as a monsoon crop from ancient times and is one of the most highly prized pulses of Madhya Pradesh. Black gram cultivation, over the last couple of decades, has witnessed a steady fall thanks to farmers’ preference for soybean, a cash crop. To a great extent, high vulnerability of black gram to YMV has also dissuaded farmers from its cultivation. Notwithstanding its high vulnerability to YMV, black gram continues to be a popular crop due to community’s dependence on black gram for consumption purpose.

Unlike soybean, which is grown as cash crop, black gram is grown as a food crop. Besides, black gram is a hardier crop than soybean and its cultivation involves lesser expenditure than the cultivation of soybean. However, nowadays when farmers cultivate black gram they rely more on providence than any other. For, if YMV spares their crop farmers get sufficient pulse for domestic consumption. But if YMV attacks the crop, they get nothing. Small Holder Farmers’ Collectives (SHFC) constituted by SAFBIN had held several rounds of discussions to identify solutions for the dreaded YMV attack. They also held consultations to identify traditional practices which were efficient to fight off the YMV. Caritas India’s SAFBIN programme endeavours to insulate smallholder farmers from food and nutrition insecurity by developing adaptive agriculture solutions that are efficient to meet the challenges of climate change. The programme envisages developing locally viable and affordable agriculture models. SAFBIN is being implemented in 30 villages of Satna, Sagar and Mandla districts of Madhya Pradesh.

During the community analysis the farmers discovered the climatic features that precipitate and aggravate YMV attack. They found that a combination of climatic conditions involving high humidity, cloudy weather and increase in temperature due to uneven rains or dry spell is primarily responsible for the spread of YMV. Farmers of the region have traditionally been cultivating Khajua, a local variety of black gram which is robust and suitable to the local conditions. However, like any other black gram variety, Khajua too is susceptible to YMV attack. Since the smallholder farmers did not have a variety of black gram that could withstand YMV attack, they started searching for traditional solutions that can ward off YMV. Finally they zeroed in on ‘Neem’ (Azadirachta indica) which is traditionally used as a remedy for several human, animal and plant diseases. Farmers decided to test the ability of extract of Neem seeds to defeat the dreaded YMV. SAFBIN then conducted several reviews to check the effectiveness of Neem oil to check YMV attack. It also contacted agriculture research and extension institutions like Krishi Vigyan Kendra (KVK) and authenticated the efficacy of Neem oil in fighting YMV. Encouraged by the endorsing opinion of researchers and agriculture extension officers, farmers designed a black gram trial involving Neem oil for solving the YMV riddle. SHFC members then developed a draft trial design with a combination of Neem oil application and use of organic growth promoters. After the trial design was ratified by farmers’ collectives, several farmers volunteered to test this design on their farms. Thus twenty progressive smallholder farmers of ten villages implemented black gram trials in their plot. Significantly, all these farmers volunteered to conduct the trials without seeking any material or monetary assistance from SAFBIN. 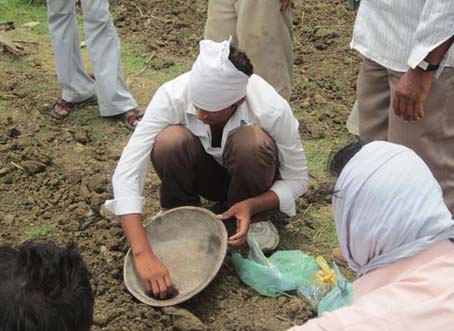 The black gram cultivation model which is trialed in 10 villages for combating YMV menace is an innovative combination of solutions. Apart from using traditional solution of Neem oil, the trial will apply Rhizobium and Phosphate Solubilizing Bacteria (PSB) culture for treating seeds. Besides, the trial will also use various Farm Yard Manure (FYM) and fish manure during the branching and pod initiation stages as growth promoters.

The process of trial design finalization itself was a great learning for the smallholder farmers of Sagar. Community supported progressive farmers who volunteered to conduct the trial by participating in the trial implementation like field preparation, broadcasting, seed treatment etc. Smallholder farmers are now confident that their trial design will repel YMV attack and create a sustainable black gram cultivation model that is environmentally sound and efficient to meet the vagaries of climate change.